The Rondo Neighborhood and I-94

Overview from the Minnesota Historical Society:

"By the 1930s Rondo was the heart of St. Paul’s African American community, not only housing the majority of African American residents in the city, but also home to critical community businesses, organizations, and institutions such as the Pilgrim Baptist Church, the Hallie Q. Brown Community Center, and the Sterling Club.  However, by the late 1950s this tight-knit community would be shattered by the construction of Interstate 94, connecting the downtown business corridors of Minneapolis and St. Paul.

"Initial expressway plan for the Minneapolis-St. Paul connection was known as the St. Anthony Route, which would follow St. Anthony Avenue (parallel to University Avenue) and extend right through the heart of the Rondo neighborhood.  St. Paul city engineer George Harrold opposed this plan--citing concerns about loss of land for local use and the dislocation of people and business--suggesting the alternative Northern Route, which would run adjacent to railroad tracks north of St. Anthony Avenue, leaving the street intact. Ultimately, the St. Anthony Route was chosen and approved by government officials citing its efficiency.

"In 1955, Rondo community leaders Reverend Floyd Massey and Timothy Howard worked to lessen the effects of freeway construction and gain support for a new housing ordinance through the formation of the Rondo-St. Anthony Improvement Association.  Their advocacy was successful in achieving a depressed (below-grade) construction of I-94, however, the route still split the Rondo neighborhood and forced the evacuation and relocation of hundreds of people and businesses.  One in every eight African Americans in St. Paul lost a home to I-94. Many businesses never re-opened.

"Although the neighborhood would never be the same, the spirit of Rondo lives on.  In 1983, the first annual Rondo Days festival was held in July celebrating the history and continuing legacy of the community.  The experience of Rondo and I-94 was also frequently cited and discussed as a cautionary tale informing and impacting the construction of the Green Line light rail service connecting St. Paul and Minneapolis, which opened to the public in 2014."

The following resources provide key historical context to understanding the Rondo situation, which is a key episode in the history of racial inequity in the Twin Cities.

The Minnesota Historical Society has created a detailed LibGuide with links to key secondary and primary sources, along with images and artifacts held in their collection.

"In this book, real-life stories illuminate the northern urban black experience during the first half of the 20th century through the eyes of Saint Paul's historic Rondo community. We glimpse the challenges of racism and poverty and share the victories of a community that educated its children to become strong, to find personal pride, and to become the next generation of leaders in Saint Paul and beyond." - From publisher's description

Rondo: Behind the Pavement (film and podcast)

"Saint Paul Almanac, in partnership with St. Paul Neighborhood Network (SPNN) and High School for Recording Arts (HSRA), presents Rondo: Beyond the Pavement, a new student-produced film and podcast that chronicles the history of a once-thriving African American neighborhood torn apart by the Interstate 94 corridor."

The Birth of a Metro Highway (Interstate 94) (article)

Short article detailing the history of the planning of Interstate 94 connecting the Twin Cities, and the subsequent destruction of Rondo and other neighborhoods.

The Rondo Neighborhood and I-94 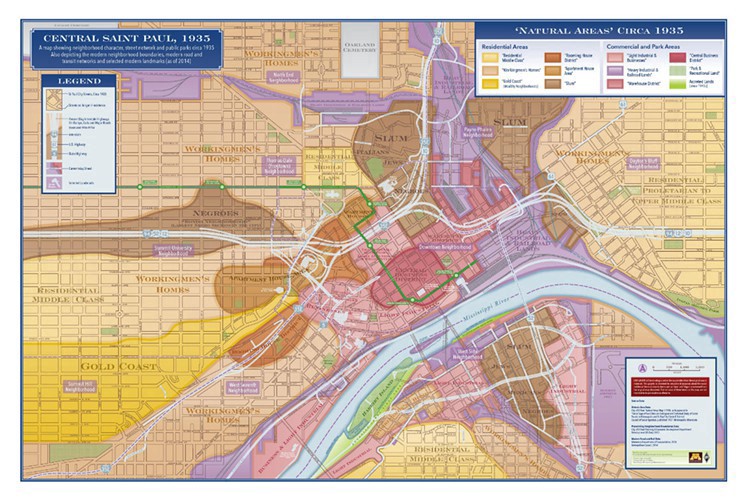 A map by Geoff Mass demonstrates the impact that I-94 and the Green Line have had on the Rondo neighborhood. (City Pages) 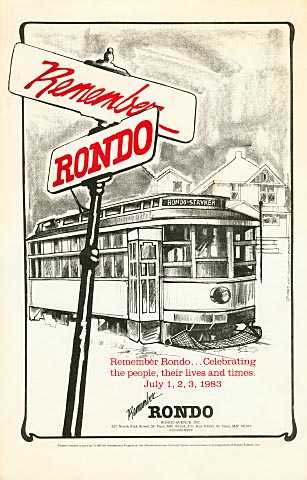