"Fake news" and misinformation are nothing new, but social media is making it easier to spread false information further and faster, whether that's knowingly or unknowingly. Since the beginning of the Black Lives Matter movement, as well as the current protests following the killings of George Floyd and Breonna Taylor, false information has gone viral over and over. Check out these resources to learn more about why fake news is so endemic to this particular moment and what you can do as someone who consumes and shares media to stop its spread.

This article pulls together pointers from misinformation experts to help you decipher truth from fiction online. Tips include: use photo sourcing tools, check the source of the story, see who initially promoted the story, and don't take "official" sources' word for it.

Article from CNET detailing the often serious consequences of viral misinformation. Excerpt: "social media's inability to contain the explosion of misinformation takes on new urgency as peaceful protesters battle the perception that all of the demonstrations have devolved into looting and violence. Twitter's role in spreading news in real time without any checks makes it particularly vulnerable to manipulation. Over the past few weeks, along with tweets about protestors being responsible for Underwood's death, other false theories have made the rounds, including an internet blackout in Washington and the far-left militant group antifa sending protesters to cause unrest in cities across the US. And once something hits Facebook, with its over 2.6 billion monthly active users, it's hard to counteract."

This article covers online newsgathering, verifying it, and using it ethically. It is targeted to journalists, but is good information for anyone sharing information online. It includes detail on how to verify photos and videos, as well as ethical implications of sharing information that may not be yours to share. 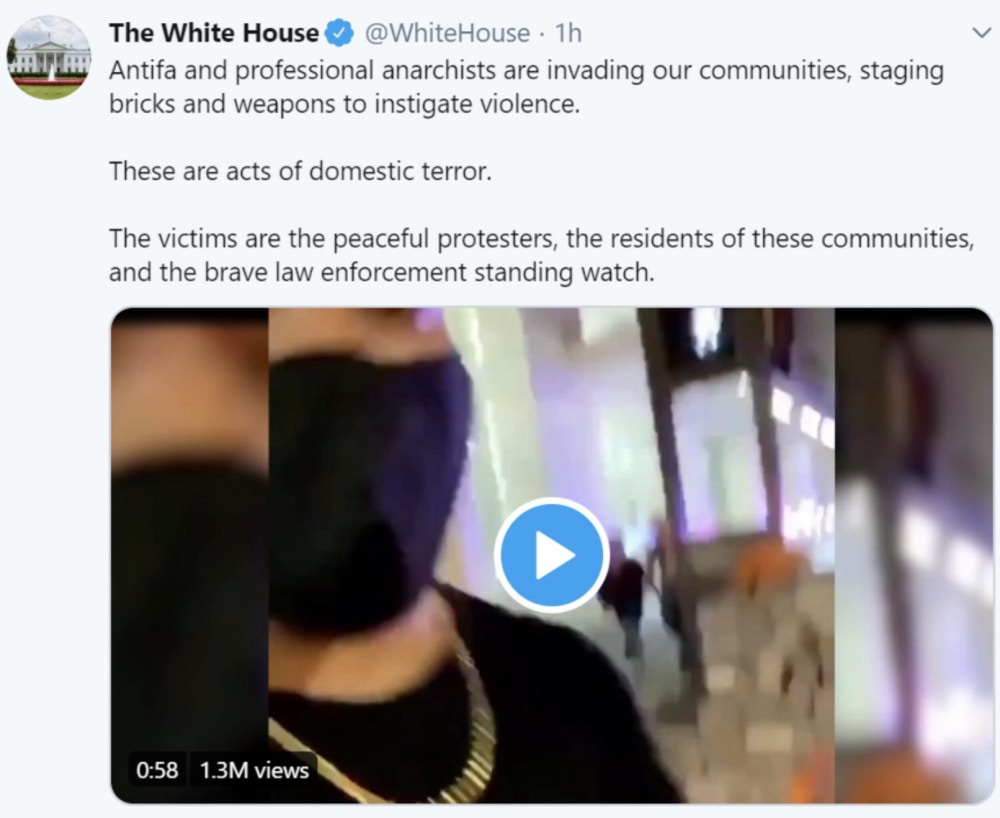 The official White House Twitter account posted this tweet on June 3 (it has since been deleted) with a compilation video of viral clips posted on social media of people coming across piles of bricks they believed to be planted by anti-fascists, known as Antifa, to incite violence. As The Intercept reports, "Within minutes, journalists discovered that most of the clips included in the video posted online by the White House had already been investigated and debunked. A short time later, without explanation or apology, the White House deleted the video from its official Twitter and Facebook feeds — but only after it had been viewed more than a million times on Twitter alone." The article on The Intercept goes into detail investigating the claims made in the video and debunking them. 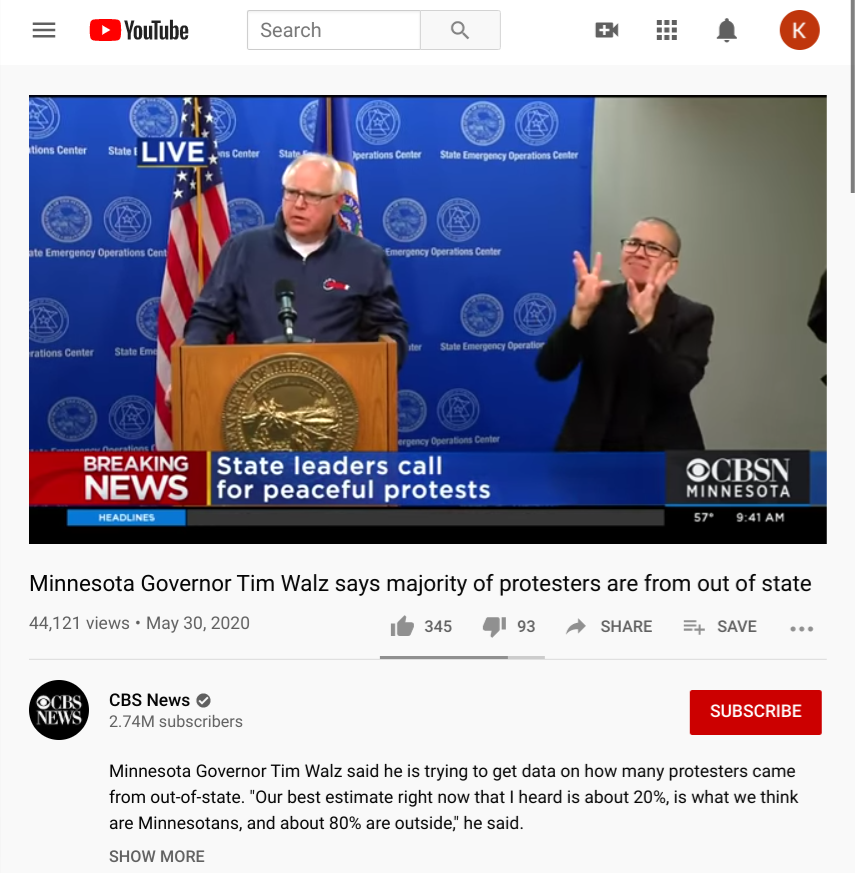 Those causing property damage in Minneapolis mainly "outside agitators"- FALSE

Minnesota Governor Tim Walz said in a press conference that he believes 80% of those who inflicted damage on Minneapolis were from outside Minnesota. The United States President later backed him up on Twitter.  The mayor of Minneapolis, Jacob Frey, said "The people that are doing this are not Minneapolis residents." The mayor of St. Paul, Melvin Carter, said "Every single person we arrested last night I'm told was from out of state." The problem is, those statements have been shown to be untrue. This article in Time magazine has the details. For more on the "outside agitator" trope, check out this article from Vox or this episode of the podcast Code Switch. 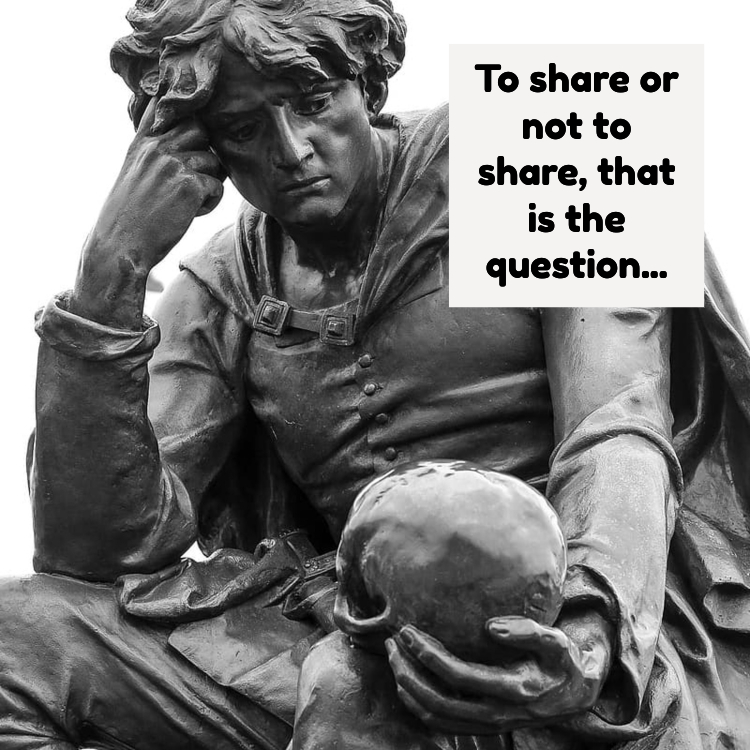 While following breaking news about very politicized topics, including the Black Lives Matter protests, here are a few things to keep in mind

- Accuracy and speed are often in direct conflict with each other as information is shared. The first thing published might not be the most accurate.

- Bias check! Be mindful of the biases of your sources as well as your own biases. It's natural to seek out information that confirms preexisting ideas you have. Make sure you're applying the same rigorous information literacy lens to ALL news you read.

- Photos and videos can sometimes be misleading. Always trace media to its original source and get the full context (this is also called "going upstream").

- Read closely and look for corroboration from multiple sources!

- Know that everyone falls for "fake news" sometimes! If you discover something you shared isn't the full truth, or isn't true at all, fix your mistake and (gently) correct others' misconceptions.

- For more information, check out our Assessing Online Sources guide